Elect Barbara Jordan: It’s Time for a Rio Rancho Mayor Who Welcomes Everyone

Barbara Jordan, an African American of African descent, is running for mayor of Rio Rancho. A true patriot, Barbara rose out of a horribly abusive home to retire from the Air Force after 24 years of distinguished service with the rank of E-7, Master Sergeant.

In the Air Force, she was stationed in Afghanistan,  Iraq, Australia, Cypress, South Korea, and Kuwait.

After her last assignment at Kirkland AFB, where she fell in love with our enchanted state, she settled here in Rio Rancho. She specifically chose Rio Rancho because of the excellent schools for her son.

Since living here she has untiringly served her community. She helped the  homeless by providing winter clothing; became a CASA (court-appointed special advocate) volunteer, advocating for  children in foster care; conducted memorials for victims of shootings; and registered voters.

And yes, Barbara protested with Black Lives Matter, where she was frequently the keynote speaker.

During an informational rally and voter registration drive in Rio Rancho on September 12, 2020, counter protesters, many armed with guns and knives—and even one with a machete—broke through the  police barricade to surround Barbara and her friends.

The counter protesters tried to drown out her speech, spit on her, and hit her. They verbally assaulted her, telling her to go back where she came from and calling out racial epithets.

These people with their ugly behavior are her neighbors and my neighbors. She is one of us.

In spite of their treatment toward her, Barbara stayed because she knows most residents of our city are welcoming and filled with goodwill.

We are so fortunate she decided to make Rio Rancho her home. She is a true patriot.

Barbara is one who says,  “I will not give up, I will not be intimidated, and I will stand for my values and morals.”

Barbara is one who says, “I will leave this country a better place than the one I was born into.”

That is what a patriot does. A patriot loves the country enough to confront its failings and find solutions for the problems.

Barbara Jordan is a forward thinker and a problem solver. She honed her leadership skills in the military and as the founder of PRESS (People Requiring Equality within Systemic Racism), an organization that advocates for a fair and just society.

She opens her arms wide and welcomes anyone who wants to see a better Rio Rancho for our children. No matter how good or how progressive you think a community is, there is always room for growth.

Barbara welcomes diversity; she welcomes people of all faiths and no faith. She welcomes those who want to usher in important and positive changes. She is energetic, tireless, and joyful. She will bring all of these qualities to the mayor’s office at Rio Rancho.Barbara Jordan is my hero and a hero to countless others. 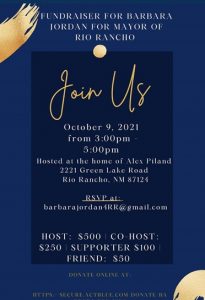