Gimme Some Truth Part I – Wisdom for Democrats from Sen. Fred Harris 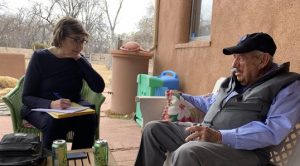 Fred Roy Harris was born in 1930 in Walters, Oklahoma. After graduating from University of Oklahoma Law School with distinction, Harris was elected to the Oklahoma State Senate in 1956. At age 25, Harris was the youngest State Senator in Oklahoma history. He remained the youngest senator for the eight years he served.

In 1964, Harris ran for and won a U.S. Senate seat for Oklahoma. While in the U.S. Senate, Harris was, among other things, the driving force for successful federal legislation directly affecting New Mexico: the legislation to return their 48,000-acre sacred “Blue Lake” land to the Taos Pueblo.

Harris served as Chairman of the Democratic National Committee in 1969 and 1970 and caused reform that brought full representation to women and minorities. In 1972, Harris left the

U.S. Senate. In 1976, Harris sought the Democratic nomination for the presidency as part of his work for an “economic democracy” for the United States. Harris had a compelling populist appeal in politics.

In 1976, Harris came to the University of New Mexico to teach political science. On a sunny March afternoon, Judy Gordon and I traveled to Corrales to visit with him. We wanted his insights on youth in politics, money in politics, and the stories of politics.

We asked Sen. Harris how he had come to politics at such a young age and what in his experience could be useful to galvanize youth participation in politics today.

First noted was the practical advice of Sen. Harris’s wife Margaret Elliston (Chair, Democratic Party of New Mexico, 2018-2020) to “hire them” when there is a campaign or political job available.

Secondly, Sen. Harris noted that youth can be difficult to organize and turn out for meetings. Often, this is because they do not have transportation or the time to take from studies or work.

Youth participation is vital to a forward-looking political party. Jimmy Carter pointed out the strong correlation between a person’s age and likelihood of voting. Those in their twenties have only about a 20 percent rate of participating versus 60-year- olds’ 60 percent rate.

Sen. Harris’s ideas for involving youth include the following:

Were You Well Known and Well Financed When First Entering Politics?

Sen. Harris assured us that he had “no money” when he first ran for a state senate seat at age 25. You couldn’t buy advertising without money, so Harris won his seat by talking to and organizing people.

Then, running for the U.S. Senate, he went to every town in Oklahoma and talked to people. He organized meetings in each town and had a campaign committee chair in each town. He asked for volunteers in each town.

Sen. Harris believes that volunteers in a campaign are the same as, or even better than, money. The volunteers help build the connections— and they vote.

To prepare to run for office, a candidate needs to build many connections with voters. This can be done by getting involved in civic affairs. For example, Harris became a volunteer lobbyist for the PTA.

After the Supreme Court ruling in Brown v. Board of Education, Harris met with Black parents to reassure them their children would be safe in the state’s newly integrated schools.

Our interview will conclude next month with how to counter Republican smears, the war in Ukraine, and more.