Abortion Rights Are on the Ballot – Keep New Mexico Blue 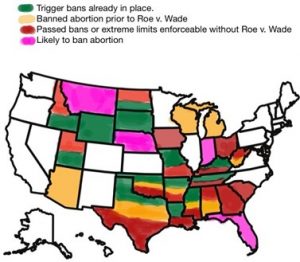 Re-printed from the Rio Rancho Observer with permission. The leak of the draft Supreme Court decision is a wakeup call that a handful of right- wing Christian theocrats are about to pull the plug on abortion rights.

Denying women abortion rights is unscientific and hazardous to the health of women and children. Sadly, that is not a concern for those who would have the government police our bodies.

Many states have trigger laws or will soon enact laws that will outlaw or severely restrict abortion after the court decision is issued; other states will quickly follow suit.

In many states, safe and legal abortion will be all but impossible. Louisiana is on track to criminalize abortion, leaving women with the choice of forced childbirth or serving a prison sentence for murder.

Thanks to Gov. Michelle Lujan Grisham and our Democratic state legislature, New Mexico’s law criminalizing abortion was repealed. But the fact that every Republican in the state legislature voted against repeal tells us what’s in store if we don’t keep New Mexico blue.

The vile, extremist and unscientific anti-abortion rhetoric spewed by the Republican contenders for governor tells us all we need to know about the perils to women, children and families if any one of them were to win in November.

The likely Supreme Court decision threatens not only an end to abortion rights but to other privacy rights as well: same-sex marriage, interracial marriage, the right to contraceptives and much more.

Women’s rights are on the chopping block. Women don’t want to be forced to give birth, to have others’ religious beliefs control our health-care decisions or have the government in our bedrooms.

Saying that democracy is on the ballot is a terrifying truth, not a scare tactic. We must do everything in our power to keep Sandoval County and our beautiful state blue.