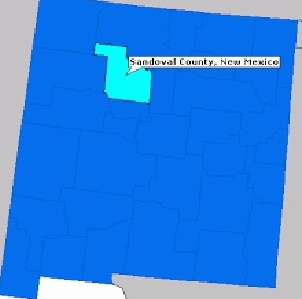 Wards and Precincts in Sandoval County

The County Central Committee on Dec. 11, 2021, voted to expand from 5 to 13 wards. Five wards will go to the communities outside of Rio Rancho and 8 will go to Rio Rancho itself. The following will describe each of these Wards in the order they were created. 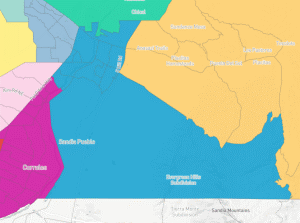 This Ward will consist of the entire town of Bernalillo, including the communities on the West side of the river, plus 2 precincts from River’s Edge, and Sandia Pueblo. Sandia Pueblo and the other parts of River’s Edge fit better with Bernalillo than anywhere else, and they serve to pad out the population in the Ward. It’s boundaries are 528, 550, I-25, and the Reservation borders of Santa Ana and Sandia Pueblos. Its estimated population is 11,449 and its partisan lean is D+24. 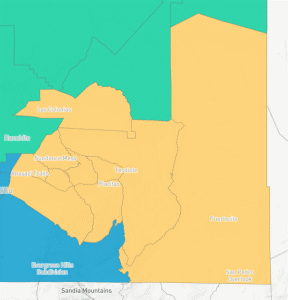 The only physical boundary in this Ward is I-25, the rest being borders with Santa Ana, Sandia, San Filipe, and Kewa Reservations, and the county line. It is dominated by Placitas but also contains Algodones and La Madera around the back of the Sandias. Its population is only 6,607, but it is a difficult area to organize in and is important to the party so is deserving of its own Ward. Interestingly most redistricting plans for state house and senate districts keep this Ward whole and separate from other areas in the county, mostly for VRA reasons. It’s expected partisan lean is D+18. 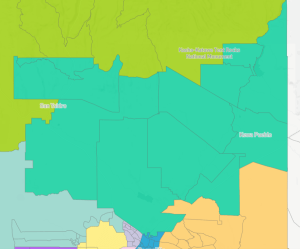 This Ward starts at the Eastern county line by Pena Blanca, is bound by the Rio Grande and Cochiti Lake, then follows reservation boundaries all the way out to Jemez Pueblo. It then swings back around on reservation boundaries until it meets the county line again. This Ward would contain all major tribal groups in Sandoval County except for Sandia Pueblo, Jicarilla, and Torreon. My hope is that this structure would allow for these groups to organize and produce local strength and political leaders. I also hope this will give the party a strong Native voice. Its estimated population is 11,381 and its partisan lean is D+74. The only non-tribal communities within it would be Pena Blanca and Cochiti Lake. 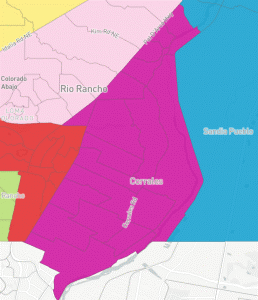 Ward D will follow the municipal boundaries of Corrales until they meet with River’s Edge where it then follows the Rio Grande until it hits the dividing line between Precinct 119 and 64. It then follows the bike path until it meets highway 528 and takes it back down, until highway 528 meets the Arroyo de los Montoyas. The boundary then follows the Arroyo until it meets with Corrales’ municipal boundary agian. This Ward will keep Corrales whole while still meeting the population threshold. The estimated population of this Ward is 12,249, and its expected partisan lean is  D+13. 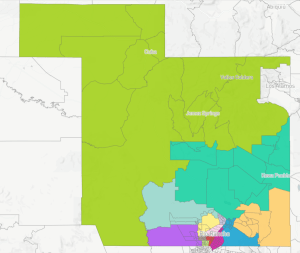 This is essentially the former Ward C. Essentially Jemez Pueblo will be removed and put into a Ward with the other Pueblos. In exchange the two Valles Caldera precincts (78 & 79) will be swapped in. The whole Ward will become Ward E North County. It will include Cuba, Ojo Encino, and La Jara, as well as Torreon, The Jicarilla Apache, Counselor, San Ysidro, and the Jemez Springs area. Its boundaries are most of the county line, and the Reservation boundaries to its South, as well as the Rio Puerco. It’s estimated population will be 6,019 and its partisan lean would be D+14. 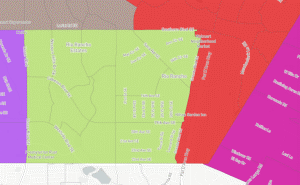 Ward F is bound on the South by the county line and on the North by Southern Blvd. It is bound in the West by Unser and the East by Grande Blvd SE. It would be the densest populated Ward in the County with a total population of 12,972. Cabezon fits perfectly into our 13 ward compromise map, any more Wards and I would have to split it up. It is probably the cleanest looking Ward in the new proposal as all it’s bounds are major roads or the County line itself. It’s expected partisan lean is R+5. 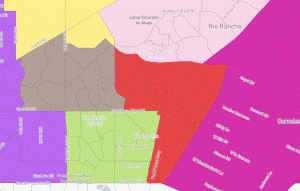 Dominated by Corrales Heights and the rich neighborhoods around High Resort Blvd. It is a dense Ward consisting of Rio Rancho’s precincts East of 528 attached to the Precincts West of 528 but North of Southern Blvd. It’s also bounded in the West by Broadmoor Blvd, and in the North by the Arroyo de los Montoyas. It’s estimated population is 12,579 people, and its’ partisan lean is R+6 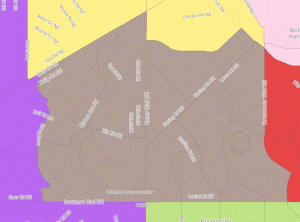 The second densest Ward in the new map, this area takes in the Rolling Hills Neighborhood and its surrounding dense areas. It is bound on the East by Broadmoor, and in the North by Abrazo and Idalia. This Ward goes across Unser Blvd and into Star Heights and Granada Hills, to its Western boundary on Ivory Road. Its Southern boundary is Southern Blvd. The estimated population is 12,879 and its expected partisan lean is R+3

This area contains some of the least dense, and least developed areas in Rio Rancho. It’s only major neighborhoods are Cedar Hills, Heritage Hills, and Tierra Del Sol. Beyond those most houses are not yet part of any named community. Ward I is bound on its South end by the County line, and in the West by the Arroyo Benavidez and the Arroyo Once. In the North it follows 28th ave which is mostly a dirt road. In the East it is mostly bound by 10th St NE until it reaches Idalia, and is then bound by Ivory rd, until it picks up Southern. Lastly it’s border follows Southern to Unser and then Unser to the County line. It’s estimated population is 12,957, and it’s expected partisan lean would be R+14 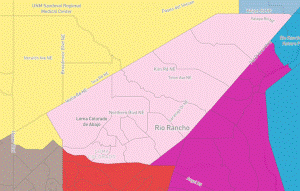 This Ward will be the bar in the dumbbell structure of Rio Rancho. Less dense than surrounding areas, it is dominated by the Loma Colorado neighborhood and contains the less dense annex areas of Rio Rancho. It runs from NE to SW along 528, and is bound by Idalia on its West and North sides. The Southern boundary is the Arroyo de los Montoyas. This ward will come from half of the current Ward D and Half the current Ward E. It’s population is 12,849 and it’s expected partisan lean is R+16 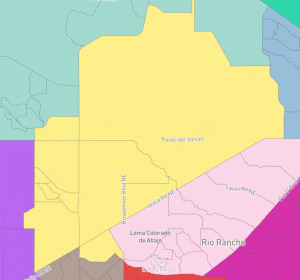 As in the name the dominant community in this Ward will be North Hills, but it also includes Cielo Grande and the communities by Cleveland High School. This is one of the fastest growing areas of Rio Rancho, and it is bound by 10th St NE/Meadows Blvd on its West. It is mostly bound by Idalia on the South except for a dip following Abrazo Rd. It then follows Chayote Rd North until it hits Caldera Rd, a dirt road that goes West. The Northern boundary is a series of dirt roads that define precinct 63, until they hit Unser, It then follows Unser to King and King back to Meadow Blvd. It’s partisan lean is D+4 and its population is 12,532. 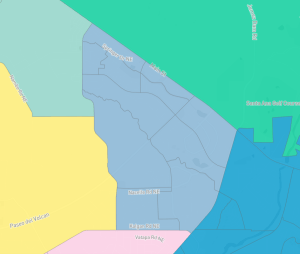 This ward will cover the newer and denser areas of Rio Rancho on its Northern end. The dominant communities are Enchanted Hills and Lomas Encantadas. It is bound on all sides by major roads. In the West Chayote Rd would be the weakest, but in the South it is Idalia, the East 528, and the East 550. It’s estimated population is 12,009 and it’s partisan lean is D+1 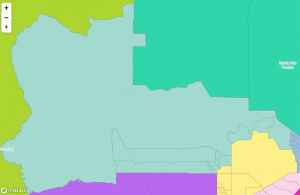 This Ward contains its namesake Northern Meadows which is the dominant community within it. It also contains Mariposa, a fast growing community to the East. It is Bound in the West by the Arroyo Benavidez and Arroyo Once, where it then follows 28th ave (a dirt road) until it hits Meadows Blvd. It then uses King until it Hits Unser, which defines the entire Eastern boundary. The remaining borders are with 550 and Santa Ana and Zia Pueblos. Its estimated population is 12,376 and its partisan lean is D+0