Gimme Some Truth – By getting involved in Democratic politics, young people can join a community to create positive change 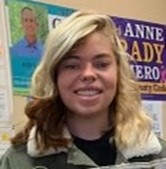 Some of us first met Hailey Fortin at the beginning of Kathleen Cates’ campaign for the State House of Representatives. Upon meeting Hailey, you could sense immediately that she was smart, energetic, and committed to being involved in politics.

Subsequently, Hailey was named Field Organizer for the Democratic Party Coordinated Campaign for Sandoval County. In that capacity, she excelled as a communicator, organizer, and campaigner. She recruited volunteers, provided canvassers and phoners with the needed tools, and often joined canvassers.

A graduate of UNM, her future plan is to get a law degree and one day run for office.

On a beautiful post- election day in Corrales, we sat down with Hailey Fortin to review the 2022 elections in New Mexico.

How did we do?

We did better than we should have done! We had approximately one-tenth the resources for workers and material in 2022 as compared to 2018. It was hard to see close local elections fail to get enough money for their end- of-the-campaign needs. We compensated all we could with consistent work, but money could have made the difference in a few very close, local races.

How did Democrats do with the youth vote?

Young voters turned out this year. To keep them, Democrats need to adjust their messaging. Young voters have faced crisis after crisis in their lives—from 9/11 to school shootings to climate change. They are also on information overload.

Rhetoric that consists of finger-pointing and ultimatums (like, “You must vote this year, or a terrible person will be elected, and terrible things will happen!”) just will not work. Instead, down-to- earth strategies for real incremental change can appeal to them: “You want change. We need change. Let’s get some change.”

In addition, we need to bring young people into leadership positions in the party, perhaps as co- chairs at the precinct and ward levels.

Volunteers often are working outside their comfort zones. You need to show them that the benefits of volunteering include being in a community.

You build that community with bite-sized assignments that can be completed. You send volunteer canvassers out in pairs so that it is less intimidating. You have a consistent schedule so that volunteers know what their weekly commitment is.

Show volunteers that it is OK to really care about things. As you work successfully together, you build community and you become a team.

I am grateful for the work performed in the past and I am positive about the future. For the young, it seems as though the world has been ending since we were born.

Politics gives us a break. We can join a community to create positive change.